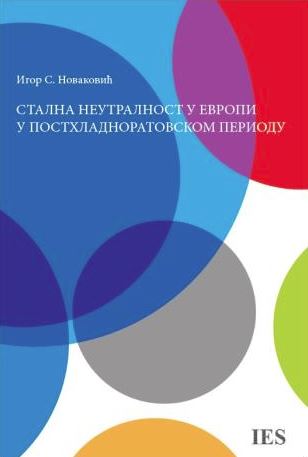 This book analyses changes in the concept of neutrality of five permanently neutral states in Europe (Switzerland, Sweden, Finland, Austria and Ireland) from 1989 to 2011, with the additional cases of Sweden and Finland, as well as Serbia up until 2015. The study describes all relevant aspects regarding the phenomena of neutrality and permanent neutrality. Moreover, it identifies what the concept of a permanently neutral state represents in Europe today, bearing in mind that the process of globalization, growing interdependence and security challenges change, as well as the European and Euro-Atlantic integration processes, including changes in the European security architecture.

The book is available only in Serbian. 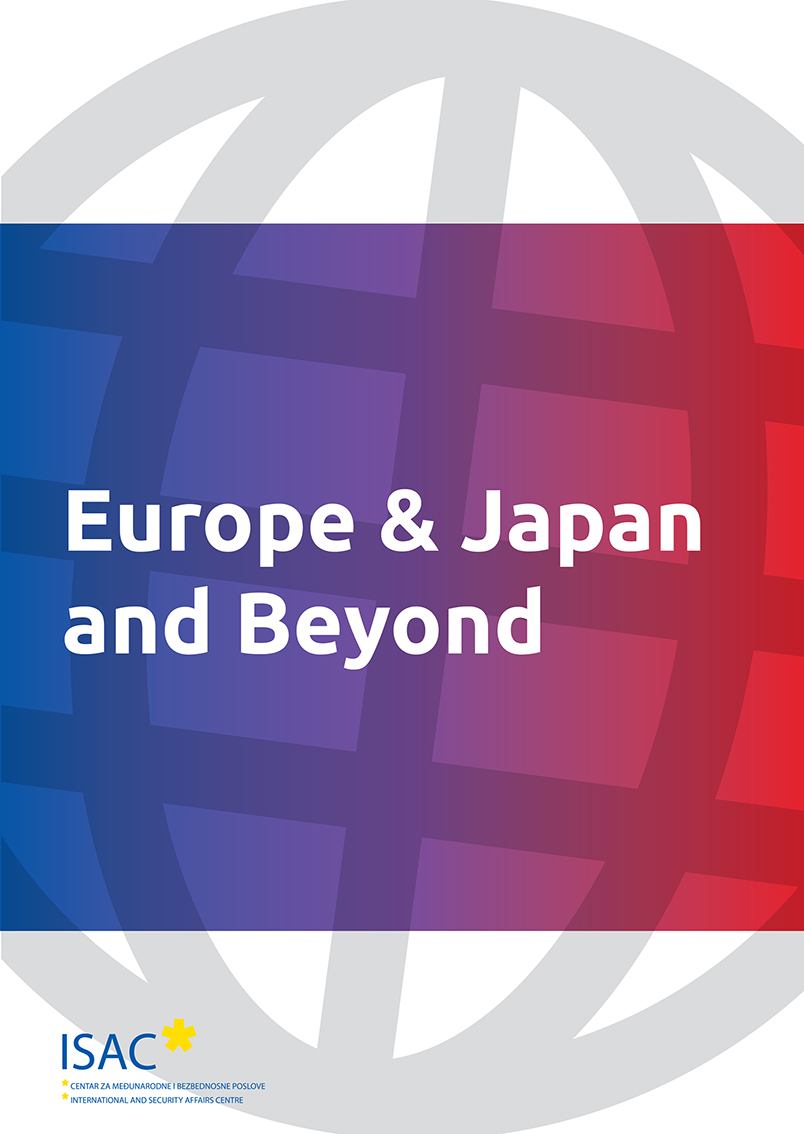 ISAC is pleased to present the collection of papers ‘’Europe&Japan and Beyond‘. This publication contains selected works from experts on international relations, common foreign and security policy, emergency situations, projects etc. Academic literature on Japan-EU relations is sparse, therefore this paper represents a significant contribution to further study of relations between one so developed but geographically distant country such as Japan and the European Union, especially the West Balkans countries. 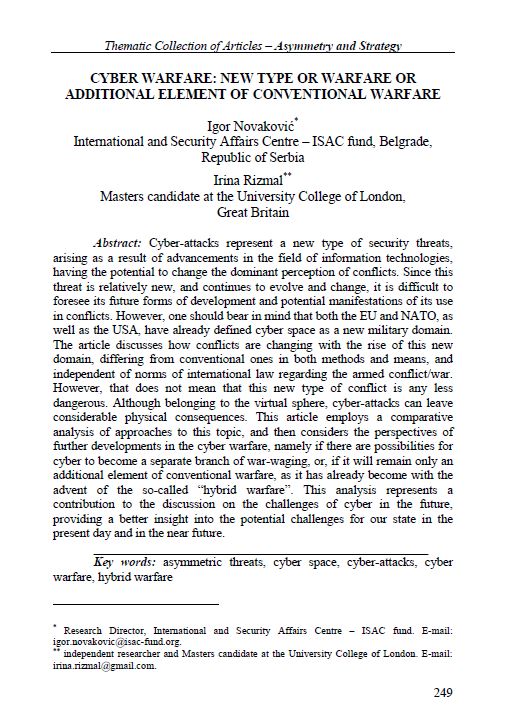 This article employs a comparative analysis of approaches to the topic of cyber warfare, and then considers the perspectives of further developments in the cyber warfare, namely if there are possibilities for cyber to become a separate branch of war-waging, or, if it will remain only an additional element of conventional warfare, as it has already become with the advent of the so-called “hybrid warfare”. This analysis represents a contribution to the discussion on the challenges of cyber in the future, providing a better insight into the potential challenges for our state in the present day and in the near future.

ISAC presents the official translation of the the New Global Strategy for European Union’s Foreign and Security Policy “Shared Vision, Common Action: A Stronger Europe” published by the Ministry of Foreign Affairs of the Republic of Serbia in cooperation with the European External Action Service, The Delegation of the European Union to thе Republic of Serbia, the Institute of European Studies and the ISAC Fund.

Impact of Minority Issues on Bilateral Relations with Neighbouring Countries in the light of the EU Accession Process – Case of Serbia.

This article considers Serbia’s bilateral dialogue with the four neighbouring countries on the implementation and respect of the domestic and international standards regarding the rights and freedoms of national minorities in Serbia. The article considers the key elements of the open issues between Serbia and each of these four countries, and their impact on the process of Serbia’s European integration. Finally, the author offers  several recommendations for the decision makers in Serbia, that can help in closing of some of the open issues, as to prevent the further escalation of bilateral misunderstandings, which could be potentially dangerous for the process of Serbia’s integration into the EU.

Turkish Interests and Involvement in the Western Balkans: A Score-Card by Žarko Petrović and Dušan Reljić
The article describes Turkey’s transformation into an important regional actor in the Western Balkans and examines the extent and limits to its influence. It further looks at the future prospects for the development of relations between Western Balkan countries and Turkey, with regards to the EU integration process.

The Concept of Neutral State
The article describes development of the concept of neutrality, its dynamic nature and implementation by some European countries.

“European” and “extreme” populists in the same basket – the new government of the Republic of Bulgaria
The topic of this article is  the phenomenon of populism at Bulgarian political scene during the last 10 years and its impact on the formation of the new government.

Russia‘s influence on the developments in Serbia
Topic of the article is Serbia’s foreign policy and the influence of Russia.

Multilateral operations – NATO
The aim of the article is to describe the development of NATO and its transformation from a traditional political-military defensive alliance to the organization of multi-dimensional structures engaged in a number of multilateral operations.

The ISAC Fund has published bilingual English/Serbian compendium of conventions on International Humanitarian Law. The publication has been prepared as a reader for the Law of Armed Conflict – Training of Trainers Course held at the Peacekeeping Operations Center of the Serbian Armed forces.

In cooperation with the ISAC Fund, the Official Gazette of the Republic of Serbia has published the book by Michel Foucher L’Union européenne un demi-siècle plus tard: état des lieux et scénarios de relance, translated into Serbian by Prof. dr Predrag Simić. In the period from 2005 to 2009, as a result of the unfavourable outcome of the referenda on the Treaty establishing a Constitution for Europe in France and the Netherlands, and the rejection of the Lisbon Treaty in Ireland, the EU has undergone a deep institutional and political crisis. These events triggered a broad debate within the EU member states on the issues of institutional reform, and the challenges to the EU’s Economic, Enlargement and Neighbourhood policy. Michel Foucher’s book is the result of the research on this debate regarding EU’s reform and future prospects.

The publication is available in bookstores and the online store of the Official Gazette.

This Collection represents the latest effort of the ISAC Fund to address another sensitive topic of regional cooperation. The publication aims to provide the information about elites in Albania and their perspective on the relations with Serbia and the Serbs. Furthermore, the Collection touches upon topics of internal political situation in Albania, as well as its current position in the region and in Europe.

With the kind help from the Royal Danish Embassy in Belgrade and the Ministry of Defence of the Kingdom of Denmark, the ISAC Fund publishes the Compendium consisting of nine notable lectures of international and domestic experts given at the 9th School of Security Sector Reform, held in Belgrade, in April 2007.

Due to an unexpectedly high level of interest, the first issue of the Compendium went out of stock by the end of 2006. With the support of the Canadian Embassy in Belgrade, the ISAC Fund published the Second and Extended Edition of this Compendium.

The first edition of the Compendium, published in mid 2006 with the assistance of the Embassy of the Czech Republic in Belgrade, consists of twelve distinguished papers presented at the earlier Schools of Security Sector Reform. Thematically, the Compendium has a wide scope, from debates on fundaments of security sector reform, through some specific problems of the aspects of this process, up to the issues of security integrations and of peace-keeping.