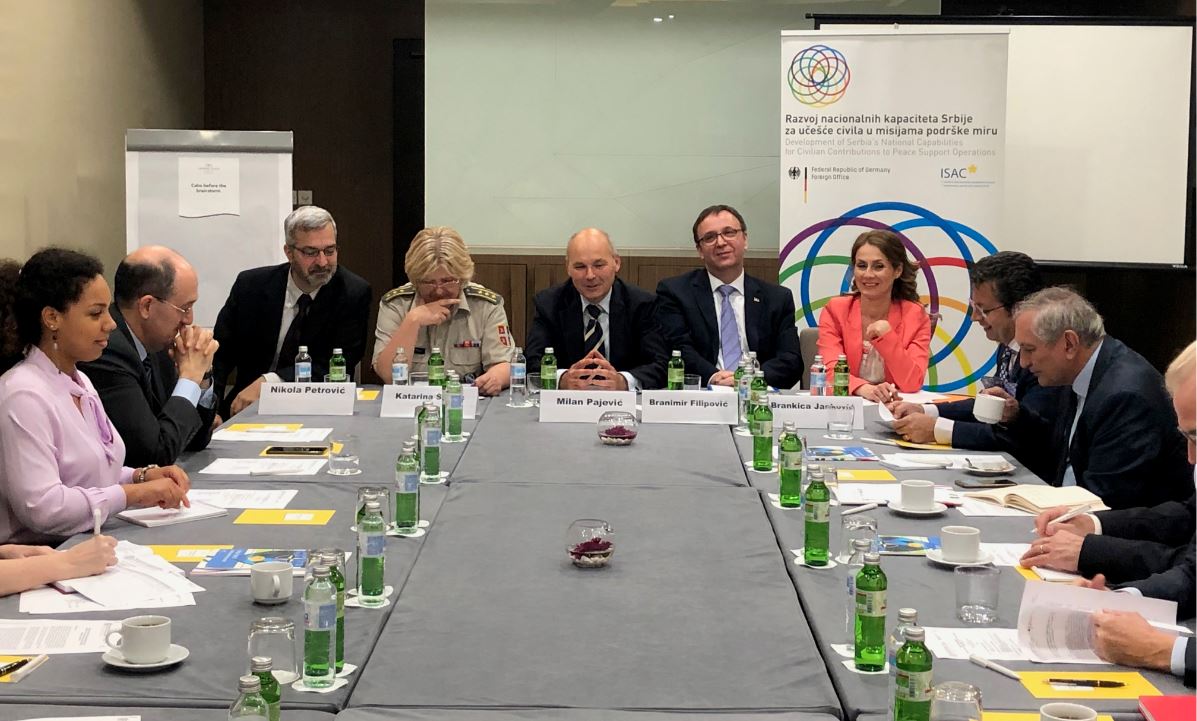 Since 2016, ISAC has been actively working on the project Serbian National Capabilities for Civilian Contributions to Peace Support Operations and Civilian Crisis Management in close cooperation with the Serbian Ministry of European Integrations, Ministry of Foreign Affairs and Ministry of Defence. This process, previously supported by the Czech Development Agency and currently by the Federal Foreign Office of the German Republic, is one of the essential obligations steaming form Chapter 31 of Serbian negotiation for EU membership, as well as a part of now traditional Serbian dedication to peace building process in the world.

On June 12, 2019, ISAC held a roundtable presentation to present the current progress made so far by the project, results achieved and what lies ahead for the next period. A few notable results since the project’s inception include the adoption of the Action Plan in 2018 by the Serbian Cabinet, which formalized the government’s participation in this process, as well as two sessions of the Comprehensive Generic Training on Peace Operations (CGTPO) for members of various Serbian institutions taking place November 26-December 7, 2018 and May 13-24, 2019 respectfully. A third training session is scheduled to begin on June 24, 2019.

Opening remarks were delivered by Milan Pajević, Chairman of ISAC’s advisory board, and Nikola Petrović, Director of ISAC. Their presentations discussed the largely untapped potential for Serbian experts to participate in civilian missions, which has resulted in many Serbian civilian experts having to participate by their own volition as contracted personnel rather than as seconded representatives of Serbia.

Branimir Filipović, Assistant Minister for Security Policy from the Ministry of Foreign Affairs, discussed the litany of foreign policy benefits that result from Serbian participation in such missions. He highlighted this project as a critical part of Serbia’s foreign policy strategy and praised the cooperation of so many countries and ministries on this issue.

The final speaker, Brankica Janković, Commissioner for the Protection of Equality, recounted personal experiences from the second session of Comprehensive Generic Training on Peace Operations, which she attended. She recounted how the “exceptionally well-organized” program expanded her knowledge, skills, and preparedness. Her presentation was followed by questions and discussion, which mainly focused on ideas for how the project could move forward most effectively. Ambassador Orizio from the OSCE discussed the support and wish for further involvement with the project and expressed his hopes to continue to collaborate in the effort to fully take advantage of Serbian expertise. Representatives of other embassies, such as Belgian Ambassador Adam Koen and Portuguese Ambassador Virginia Pina, also expressed interest in further collaboration to help build a culture of active Serbian participation in civilian missions.

We would like to thank to all colleagues, partners and participants who attended and showed great interest in the topic and further cooperation within the project.