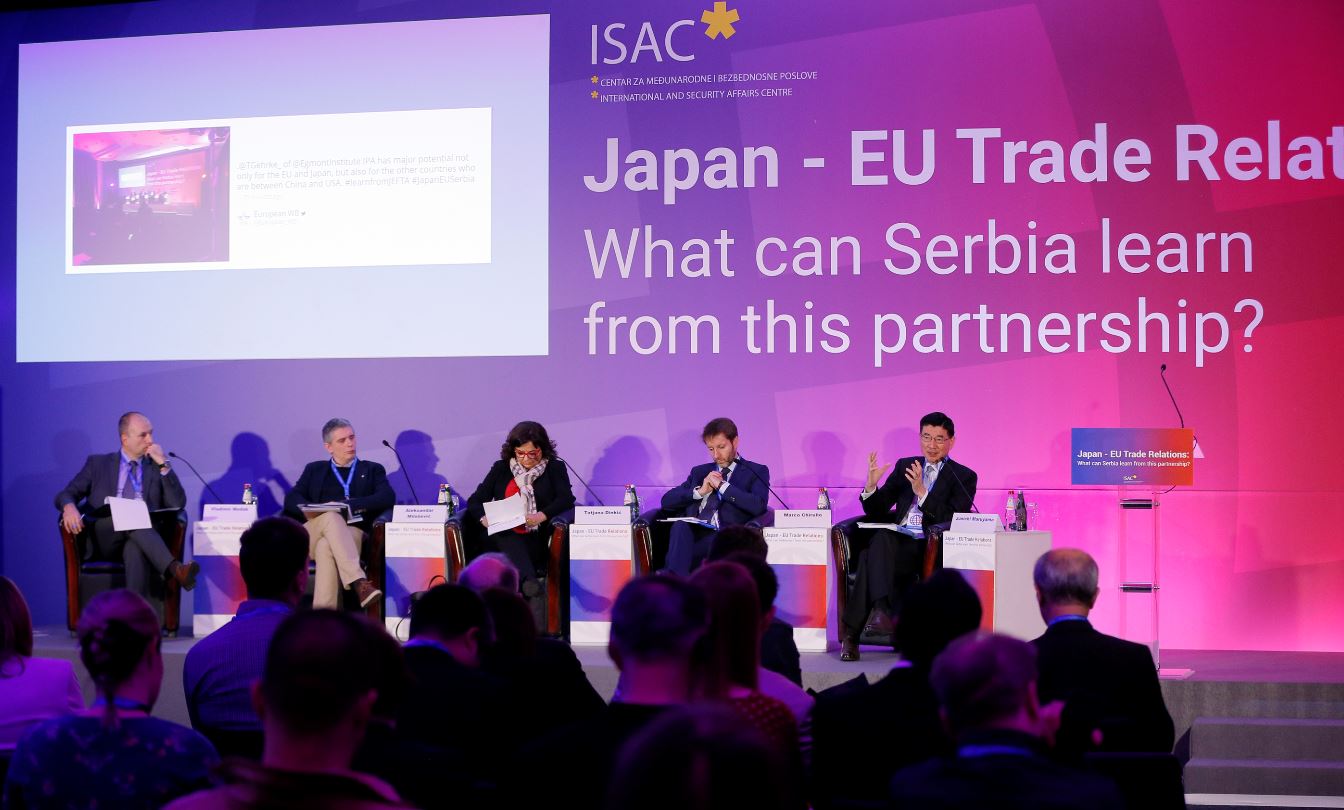 ISAC, in cooperation with the Embassy of Japan in Serbia, successfully organized the conference “Japan-EU trade relations: What can Serbia learn from this partnership“, held on February 28, 2019, at the Hotel Radisson Collection in Belgrade.

The main theme of the conference was the Economic Partnership Agreement (EPA) between Japan and the European Union (EU) which entered into force on February 1, 2019. With this agreement, the largest open trade zone in the world is created, covering over 600 million people, approximately 30% of the world GDP and 40% of world trade. The EPA represents an answer to protectionist movements and measures that threaten free trade. It removes trade barriers and sends a powerful signal that two of the world’s biggest economies reject protectionism.

At the conference discussions were held about the importance of the agreement for both the EU and Japan, as well as global trends and trade, but also about its importance for EU associated states and partners in terms of trade and investment from Japan. One part of discussion was dedicated to consequences which this agreement can have for Serbia, both as a candidate country and a future EU member state.

You can find more details about the conference and panel topics below.

The conference was opened by Milan Pajevic, Chairman of the ISAC Advisory Board who pointed out, although we are observing things from the outside world today, the singing of this agreement is of great importance to Serbia when we take into account its pro-European path. After that, an introductory speech was given by H. E. Akira Kono, Ambassador of Japan to EU and Deputy Head of Mission, Mateja Norcic-Stamcar, Deputy Head of Mission of the EU Delegation to Serbia, and Tanja Miscevic, Head of the Negotiating Team for the Accession of the Republic Serbia to EU. They reminded the participants that between Japan and EU there is historic connection of cooperation and that these two entities share common interests and rest on the common values of democracy, the rule of law and human rights, and that this agreement strengthens both economic connections, as well as bilateral relations.

The first panel “Japan-EU partnership and global economic trends” focused on challenges which are facing global trade and positions of Japan and EU. Panel participants were Dr. Shujiro Urata, professor at Graduate School of Asia-Pacific Studies, University of Waseda, Dr. Predrag Bjelic, professor of Faculty of Economics, University of Belgrade and Tobias Gehrke, Research Fellow at Egmont Institute. The panel was moderated by Prof. Dr. Ivan Vujacic, from the Faculty of Political Science, University of Belgrade.

The panellists agreed that there are international rules on which trade is based, which in the last decade has been broken with a noticeable strengthening of economic nationalism. They emphasized the need that trade questions must not be linked with other political questions, as well as necessity of the existence of stability, security and openness for international trade flows. In light of the EPA agreement, they particularly emphasized important historic trade relations between Europe and Asia though history, and that the agreement is rated as geopolitical and geostrategic. The special importance of the agreement is in the context of global economic trends as an example of fight against protectionism.

The second panel “Japan-EU economic partnership agreement and the importance for EU candidate states”, presented the positions of Japan and the EU in global trade, and above all in mutual cooperation under the Economic Partnership Agreement, as well as opportunities and challenges for Serbia. Marco Chirullo, Acting Head of Unit, DG Trade, European Commission emphasized that the agreement is a first step in positioning the EU in Asia, because after Japan the EU continue to negotiate with other Asian countries about similar models of cooperation. H. E. Junichi Maruyama, the Ambassador of Japan to the Republic of Serbia, pointed out that there are three effects that the EPA agreement will have on candidate countries: indirect effects that are current and not related to EU membership; direct but not current and related to the benefits that states will have once they become members of the EU; and investment opportunities. In the panel other participants included Dr. Aleksandar Milosevic, professor at the Faculty of Political Science, University of Belgrade and Tatjana Dinkic, Head of the working group for Chapter 30, Ministry of Trade of the Republic of Serbia, while the panel was moderated by Dr. Vladimir Medjak, Vice-President of European Movement in Serbia.

Within the third panel “Serbia’s EU integration and the case for closer economic cooperation with Japan” it was emphasized that in Serbia there are 32 Japanese companies, but that it is necessary to harmonize with the rules of the European Union in order to attract more foreign investment. This requires macroeconomic stability, “fair-play”, smaller state influence, less corruption, a reduction in bureaucracy, investment in education and science. The panel participants included Andrew Fraser, Senior Adviser to Mitsubishi Corporation, Goran Pekez, President of Japan Business Alliance Serbia, Ana Tozzi, Executive Director of Foreign Investors Council in Serbia and Mihajlo Gajic, Program Director- Economic Research Department, LIBEK. The panel was moderated by Biljana Stejepanovic, Editor of Magazine”Nova ekonomija”.

It was our great pleasure that we have been able to bring together many experts, influential personalities and people from business from Japan, the European Union and Serbia and on that way contribute to the exchange of opinions, messages and advice in the context of the new agreement and its importance and impact on global trends and trade. In the end, we would like to take this opportunity to thank all the speakers, participants and volunteers who contributed to the successful implementation of the conference.